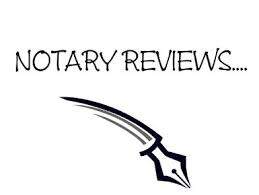 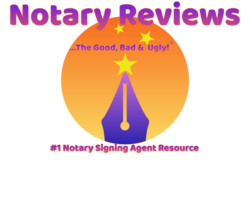 In November 2010, I created the first NotaryReviews.com website, in an effort to quickly respond to a few reviews which were posted on two (now defunct) websites: Notary Bad Reviews and Bad Notary. These websites were created by a couple of signing service owners who were pissed with the negative reviews they received from NSAs, and wanted revenge.

Now there were only three signing service companies listed as "members" on each of these websites and for those of us whose names were listed on both, we had to rebut the false reviews. I was one of the NSAs listed with a bad review, and not only had I not worked for either of those signing services, but they were defaming my good name and business, along with others, and we were determined to do something. The only thing I could think of that could be done quickly, was creating a simple website to refute those fake negative reviews...and thus Notary Reviews© was born.

While creating the website, one of the NSAs listed with a fake review, contacted an attorney started gathering names for a potential class action lawsuit, and once word got out, one of the sites came down! However, the other "bad notary" site was still up, and we were so determined to shut it down, that a number of NSAs bombarded the webhost provider with so many emails demanding it be removed that within a few hours that site was taken down as well. I thought since the goal to take on and down those websites had been achieved, then NotaryReviews.com would come down as well as I was so busy, I truly didn't have any time to run and manage a website but fate had other plans.

If it weren't for the positive feed back, increase in membership, help I received, I don't think Notary Reviews© would've made it. I recruited, really begged, my buddy James Dawson, a retired NSA from California, to help me manage the site and it was off! We received countless emails from NSAs who indicated they loved Notary Reviews©. Not only were members elated to post rebuttals in response to those false reviews, but started to post more Reviews & Ratings about other signing companies they worked for. But what members truly loved about the site, was the fact that only allowed NSAs could join.

I then extended our members privacy by creating the very FIRST NSA website which kept its online Member Forum completely PRIVATE from non-members and other creepers on the internet. Keeping what our members post, totally private, and only available for other members to read, protected them from potential harm or getting blackballed by scrupulous signing companies and others who hire NSAs for closings.

I then used my existing client list, and created the Reviews & Ratings Directory™ (RRD) so our members can market themselves directly to non-platform companies, and gain more direct work. At this time, our RRD™ consists of over 950+ companies with more being added every day.

In 2014 I underwent a few life changing events that I honestly do not wish on any enemy if I have any. But if it weren't for those events in 2014, I might not be the strongest I've even been, mind, body and soul. I felt a positive change in myself, and with my families blessings, I was ever more determined to get my entrepreneurial life back in order. I had used Facebook like we all did for family social media and never thought of it for business purposes. That all changed in 2017 I created the Notary Reviews...The Good, Bad & Ugly! facebook group to see if the need for what I started was still there. And it was...there was a HUGE an online website where NSAs could post their rants and grips (reviews & ratings) and where their posts would be safe from vengeful signing company owners.

The facebook group started to build, and its still up and running, but I now encourage members to post their Reviews & Ratings in our Members Only Forum, in order to keep their information safe and secured. I eventually recreated the Notary Reviews website due to the many ongoing security issues Facebook was and still is having, and my goal remained the same as it was in 2010, which is to keep members posts safe and secured from those companies who hire us that might want to do us harm for posting the truth.

This website was truly created out of love for this profession, and always with the NSAs best interest at heart, first and foremost. Our current success is bigger and better than I could've ever expected, and I owe it all to our wonderful loyal notary reviewers!

This website has so much to offer future members, and its because of the current ones, that I keep going. Its because of our members that I'm reminded how I'm not the only one trying to make a living and earn respectable pay, and make a profit from this unusual vocation. I'm reminded by our members, that each of us has so much to offer our potential clients, and perhaps we've yet to realize what that is, which is why we need each other!

I want to keep this site up and running until we can make an impact in this profession, and talk about how to improve upon the many issues NSAs face everyday. I want us all to learn how to come up creative and innovative ways to negotiate up from low ball paying companies, for example, or how to effectively grow our current direct clientele.  If you're a current member, PLEASE tell your fellow peers about this website, let's not keep it a secret as all hard working NSAs can benefit from what's posted herein. Let's share our ideas and knowledge to truly make this peculiar vocation, STRONG, and RESPECTED as it should be!

I will forever be grateful to those loyal members who have been with me since the very beginning, and ever so thankful for the opportunity to continue to serve my NSA community by providing a safe and secured online environment.
Carrie
January 16, 2022

Excuse any typos, I just can't for the life of me, edit my own stuff! I can for other works, but my own, I dunno!